This website uses cookies to offer you a better browsing experience.
You can learn more by clicking here.

Watch what our clients are saying ....

I put my own sales team through the sales training program at Dunn Enterprises, and I'm currently enrolled in the Sales Management course. There's no other way for a sales professional to go to market than with the concepts that Sandler and Jim Dunn teaches. Jim is an excellent coach and trainer, and if you're in the sales profession, and you want to get to the next level, this is hands down the best sales program available. I highly recommend Dunn Enterprises for any sales professional that wants to improve and achieve better results in their career. 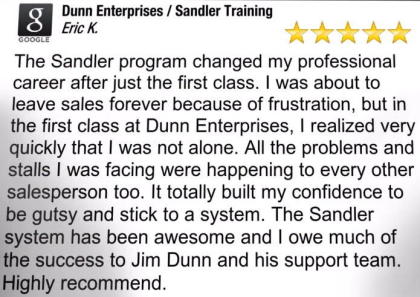 Our very own Sandler Rookie of The Year - Eric Knight, Orenda Tech

Jim's training is fantastic. Our team has taken away many tools that we have been able to implement for improving our sales force effectiveness. 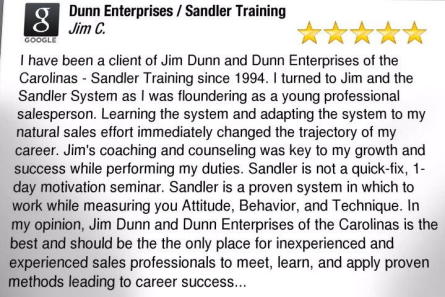 Jim Dunn is a class act and lives and breathes the Sandler Communication System. I've always been "good" at sales, but as Sales Professionals, we should ever be developing ourselves and Jim has GREATLY changed me as a leader. I've been involved in the Foundations unit, Leadership for Organizational Excellence, Sales Mastery and Enterprise Selling Solutions. The tools have helped me hold myself and my team accountable and the interaction with other Sales Professionals is invaluable from both a personal and professional side. I HIGHLY recommend Jim and the Sandler System. I look forward to continuing my learning and transformation into the Sales Manager that I want to be. 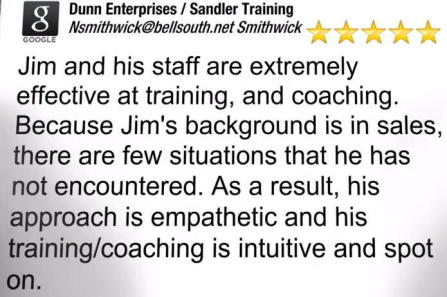 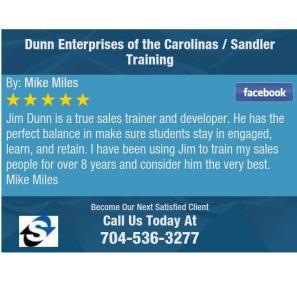 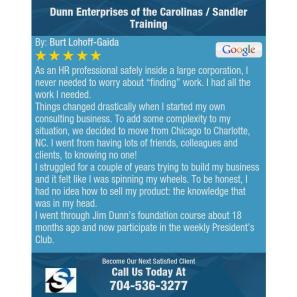 I have been attending Sandler Training with Jim Dunn for seven years.  During that time my business has almost tripled in size.  Jim teaches much more than sales.  Sandler coaching is a communications system - and it has helped me in every aspect of my business and in my personal life too.  Jim is a fantastic trainer.  He is committed, competent, and truly cares about the success of those that he works with.  I cannot rate him highly enough.  Jim is a man of tremendous discipline and integrity.  My experience with him has been excellent.  Working with Jim has been one of the best investments that I have ever made.

Jim is a great teacher and his staff does a great job.  He's been available when I needed him and I only wish I could dedicate more time to working with him and Sandler. 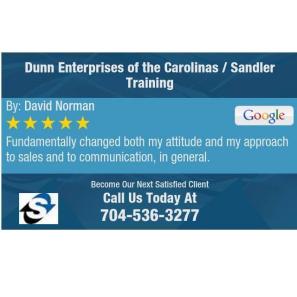 How do you sell? Be kind, work hard, make calls, network, etc. This is how most approach it. Over time they come up with a system. In some cases it works, but sales is known for high turnover for a reason; in most cases it doesn’t! Is it because people aren’t kind, willing to work hard, make calls, and network? I’d suggest it’s because most companies don’t have a system that works. They either don’t know or aren’t completely honest with themselves about why people buy from them. As a result they’re constantly reinventing the wheel trying to come up with a way to consistently sell, like kids playing football in their back yard, drawing plays in the sand. I say that with love cause that was us 10 years ago. We still don’t have it all figured out and I suspect we never will. But at least we’ve got a proven system, a solid foundation, that we’ve been building on. 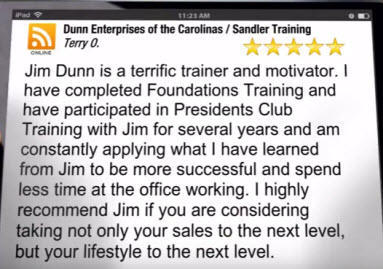